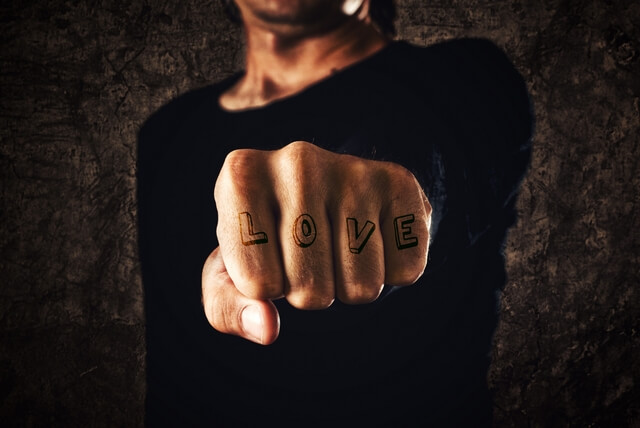 Is this  our perpetuation of traditional gender norms – of ‘man dominating woman’?

And so I issued a challenge – for men to step up and try being a bit more dominant and assertive in their sexual play.

On the surface I can understand how this perspective looks a lot like a rehash of the old outdated gender roles of the 1950’s. But what actually interests me is reclaiming this dialogue in the context of heightened sexual arousal. It’s an important distinction to make because in my opinion this conversation has been hijacked by political correctness – becoming too intellectualised and politicised, and it’s robbing heterosexual couples of intimacy and red-hot passion.

Why else do I take this approach?

Because we are currently faced with an epidemic of men who have no idea How to Man.

In my coaching practice I see way too many guys who are in touch with their feeling, emotional and sensitive sides, but are totally emasculated and paralysed by their lack of power, drive and ambition. Guys who have cultivated emotional literacy, but feel confused and betrayed as it’s often not lead to the liberation they were assured it would. Men who have grown up with closed, distant, and angry fathers and vowed to never be like them. Or conversely, men who grew up with wimpy, ineffectual pushover fathers and vowed to never be like them either. Men who have endured incredibly poor male role models and are left wondering what the hell a Good Man is supposed to look like.

Men who have basically grown up with the conditioning that masculinity = bad.

And nowhere is this more apparent than in a man’s sexuality.

We feel guilty and ashamed of our innate sexual nature. We’ve been taught to repress it and hide it away because it turns us into uncontrollable animals. It’s called ‘the demonisation of male sexuality’. It’s totally a thing. Look it up.

I’m not suggesting it’s every man who has internalized these messages. Unfortunately it’s the ‘high quality men’ – the ‘good’ men that women actually want to be with – who carry this shame. This conditioning is so pervasive that we doubt our ability to control ourselves. We fear our very nature and what we may be capable of. Not because there is actually something to fear, but because we’ve been repeatedly told there is.

Seen in this light, one might argue it’s a good thing men’s sexuality is repressed.

Because yes, men rape women. Men rape women in horrific numbers. Violence against women is one of the biggest social problems we face, and in my opinion there cannot be enough action taken to address this epidemic.

But at the same time we’re having that conversation, we also need to have the conversation that only some men rape women.

Because most men would never rape a woman. Most men never perpetuate violence against women. And contrary to the misguided political statement of some activists, most men are disgusted by rape.

I will stress here again that differentiating the intentions of the many, does not excuse the actions of the few.

But charging all men as guilty-by-association only serves to alienate and disenfranchise those who may already be on the side of an empowered womanhood.

So we need to keep having this conversation because the shaming of men needs to stop.

Because the belief that a man’s sexuality is the root of all evil perpetuates a disempowered masculinity. It doesn’t promote unity, or understanding, or move us in the direction of wholeness. It doesn’t help move us forward as a society. And while I empathize with (as much as possible, being a man and all) the pain and anger women must feel about the thousands of years of oppression endured, you don’t empower one group by degrading another. You raise them both up.

If you’re reading this and still find yourself on the “ok, but women have it worse” side of the fence, you’ve missed the point. Entirely. It’s not a competition. It’s not an either/or argument. It’s both. It’s recognizing that both ‘sides’ have validity. It’s recognizing that no issue is black or white. It’s cultivating the intelligence to recognize there are no sides here.

Only when men and women stop fighting each other and acknowledge our collective pain can we move forward in the spirit of harmony and co-creation.

So now that some context has been established, let me get back to the point – why am I encouraging men to be more dominant with their lovers?

As mentioned earlier, the idea of dominance in intimate relationships should only be applied in the bedroom (or on the kitchen table). I do not advocate for men being dominant over women in an everyday context. We’ve been there, done that, and are still picking up the pieces.

What I do advocate for is men embodying the qualities of dominance (confidence, assertiveness, focus, discipline) in a sexual context in order to rewrite the script that has seen dominance associated with it’s destructive, out-of-balance qualities as previously discussed.

By consciously choosing dominance, men can heal much of the shame associated with their sexuality.

OK, that’s great, but why not women being sexually dominant too?

Absolutely. I’m all for switching it up.

Once again this is not an either/or discussion. But here’s the thing: women in our culture already have permission to be sexually dominant. That conversation is as old as Feminism itself. And while it can be fun to play with, in my experience it just doesn’t work as well in really igniting intimacy and transforming relationships.

Oh and speaking of Feminism – there’s no doubt it’s played an instrumental role in helping guide men out of a strict and narrow definition of masculinity and into reconnecting with their feeling and intuitive selves. Getting men to be more emotionally expressive is a wonderful thing. And getting men to be more attentive to their partner’s sexual needs is also a massive win.

But this process of connecting men with their feminine nature, coupled with the outright rejection of their masculine nature, has left men stranded.

It’s left men totally lost and isolated in their ability to navigate through life and totally disconnected from expressing their Primal Essence.

And it’s not just men feeling it.

You wouldn’t believe the amount of times we hear women say “I just want him to take charge and fuck me“.

So by urging men to take the lead sexually, by urging them to step consciously into the energy of dominance, I’m encouraging them to reclaim their sexual potency. Because when men step into their sexual confidence within a safe and consensual container such as an intimate relationship, they begin to integrate a new and more empowered version of masculinity. A masculinity based not on a power-over, but rather a power-shared.

Reconnecting and re-empowering men’s sexuality wakes us up.

We wake up to our aliveness, our desire to serve and be a force for creative change. I see it repeatedly – that when a man fully own his sexuality – his sexual hunger – when he really gives himself permission to express the totality of his sexual desire, without repression and without unconsciously acting it out, his world is transformed. When he is grounded in full conscious awareness in his sex, he becomes more vibrant, more daring and more confident.

And when he does this in unison with a woman exploring her ability to sexual surrender the results are nothing short of astounding.